In March 2009, a masked thief made off with sixteen paintings from the Somerset property in Bruton. When police arrived the following day, they found a forty-seven-year-old woman tied up in the museum at 1600 GMT. They reported such revered titles as An Italian Peasant Boy by Richard Buckner, A grey pony in a stormy landscape by James Ward, John Anthony Park’s St. Ives, Endymion by George Frederick Watts (Left) and Apple Blossom by Sir George Clausen (Right) among the stolen art.

Clausen’s Apple Blossom is an oil on canvas, which is signed and dated 1899 on the back. This prominent British artist was elected a member of the Royal Academy in 1906, and was knighted in 1927. The prestige surrounding this exhibit may have attracted art critics fro around the world, but the thiefs were perhaps more interested in the price tags of these fine works. 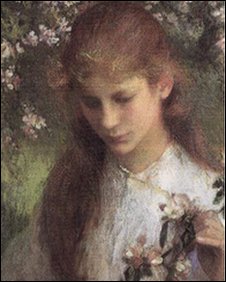 Some of these paintings have an estimated worth of 800,000 to 1 million pounds, said Richard Ellis, director of the Art Management Group. But the thieves may find it very difficult to sell the evidence, since all of the stolen art is now on the Art Loss Register; however, though this makes them nearly impossible to sell through dealers on the open market, there’s reason to suggest that they could commodity these items for exchange for drugs or other illicit operations.